Battlefield Acupuncture for the Treatment of Low Back Pain

Low Back Pain (LBP) is a significant health challenge that affects military readiness and quality of life. LBP is one of the most frequent causes of outpatient medical visits and lost-duty time (Armed Forces Health Surveillance Center, 2010). In 2007, the most prevalent reason for medical evacuation from Operation Enduring Freedom (OEF) and Operation Iraqi Freedom (OIF) were musculoskeletal disorders including spinal pain (Cohen, Brown, Kurihara, Plunkett, Nguyen et al., 2010). Among those injured and ill personnel evacuated from OIF and OEF, about 79% and 66% respectively, were unable to return to their units (Cohen et al., 2010). Roy and colleagues (2013) reported that a history of LBP significantly contributed to a subsequent LBP diagnosis during deployment, thereby impacting overall mission effectiveness. Rapid pain relief which improves physical activity yet does not interfere with mental acuity or require additional equipment can support the agility of military members and promote a fit and ready force.

LBP interventions that are effective, safe, inexpensive, rapid acting, and non-pharmacological are desperately needed for the readiness of military members.

The purpose of this study is to determine the effect of Battlefield Acupuncture (BFA) on outcomes for pain, sleep, and physical activity level in an active duty military sample with subacute or chronic LBP.

BFA is a form of acupuncture that is being increasingly used in Department of Defense (DoD) and Veterans Affairs (VA) settings to alleviate acute or chronic pain. Semi-permanent acupuncture needles are placed in five predetermined ear point locations in a defined sequence to rapidly reduce pain. BFA is cost-effective, can be effectively delivered by non-acupuncturist healthcare professionals, and preliminary results demonstrate that it may improve sleep as well as reduce pain.

This eight-week intervention study will compare BFA to placebo treatment for patients with LBP. The study is currently recruiting participants at Joint-Base Andrews, MD. A total of 150 participants are needed. Study completion is expected January 2020. 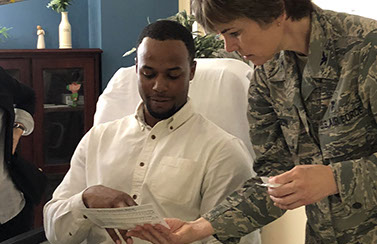 The research team is currently collecting data with expected results within two years.